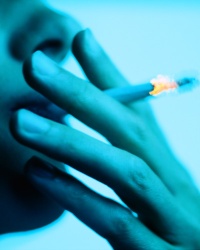 Acupuncture as an alternative approach to smoking cessation has a growing number of converts. In fact, acupuncture is often a court mandated treatment for drug addicts because of its ability to reduce cravings and alleviate withdrawal symptoms such as irritability, anxiety and difficulty concentrating.

Among current U.S. adult smokers, 70% report that they want to quit smoking and millions try to quit every year. If you have attempted to quit smoking, you know how difficult it can be. Nicotine is a powerful addiction. In fact, research suggests that nicotine is as addictive as heroin, cocaine, or alcohol.

It is estimated that most smokers will attempt to quit two or three times, or more, before finally kicking the habit. When conventional methods to quit smoking have failed, smokers often look outside mainstream approaches and turn to alternative medicine.

Acupuncture as an alternative approach to smoking cessation has a growing number of converts. In fact, acupuncture is often a court mandated treatment for drug addicts because of its ability to reduce cravings and alleviate withdrawal symptoms such as irritability, anxiety and difficulty concentrating.

More than 50 million Americans smoke. The numbers are even higher in other parts of the globe, with worldwide statistics showing that one out of three people over the age of 18 are smokers.

The reasons to quit smoking are endless. Cigarettes have 4,000 chemicals, including 43 known cancer-causing (carcinogenic) compounds and 400 other toxins. These include nicotine, tar and carbon monoxide, as well as formaldehyde, ammonia, hydrogen cyanide, arsenic and DDT. According to the CDC, tobacco is the cause of 443,000 premature deaths each year, and is associated with emphysema, lung cancer, high blood pressure, shortness of breath, chronic cough and an increase in frequency of colds and flu.

Many people want to quit because of the enormous expense of a cigarette habit or are just plain tired of being dependant on a substance. There is also considerable social pressure not to smoke. Most smokers can recall a dirty look or rude comment from someone that was nearby when they lit up.

How Does Acupuncture Help Break the Cigarette Habit?

Acupuncture is successful with smoking cessation and has turned a growing number of cigarette smokers into permanent ex-smokers. Treatments take all of your symptoms into account and aim at balancing the energy within the body to optimize health.

The acupuncture treatments focus on jitters, cravings, irritability and restlessness; all symptoms that people commonly complain about when they quit. It also aids in relaxation and detoxification.

In one study conducted at the University of Oslo, Norway, acupuncture was found to significantly reduce the desire to smoke up to five years after the initial treatment. Subjects of the study also reported that cigarettes tasted worse than before treatment and that the treatments had effectively reduced their taste for tobacco.

The acupuncture needles used are hair-thin. They are superficially inserted into various points in the ears and body to assist with smoking cessation. In between treatments, small pellets are often taped to the acupuncture points on the ear. When a cigarette craving hits, gently pressing on the pellets stimulates the acupuncture points to calm the mind and eliminate the craving.

Acupuncture is not a panacea or a magic cure in the treatment of any addiction, including smoking. But, acupuncture is effective in making it easier to quit and remain smoke-free for good.

If you are ready to quit, call an acupuncture provider near you for a consultation to see how acupuncture can empower you to take control and begin a healthy and smoke-free life!

What Points Are Used?

Each patient is custom-treated according to his or her specific and unique diagnosis. Usually a combination of body acupuncture points and points on the ear are used that are believed to influence the organs and energetic pathways associated with smoking.

Typical treatments last from five to 30 minutes, with the patient being treated one or two times a week. After removing the needles, ear press needles or silver pellets are often applied to stimulate the points between treatments and reduce cravings.

Are There Herbs To Help Me Quit Smoking?

Often you are prescribed herbs or supplements to control cravings or withdrawal symptoms.
There are three areas to address for herbal support; dryness and tissue repair, irritability and cravings.

NOTE: The improper use of Chinese Herbs can be dangerous. Please consult with a licensed acupuncturist and herbologist before taking any herbal products.

What Lifestyle and Dietary Changes Should You Make?

How Many Treatments Will I Need and How Long Do they Take?

The length, number and frequency of treatments will vary. Typical treatments last from five to 30 minutes, with the patient being treated one or two times a week. Some symptoms are relieved after the first treatment, while more severe or chronic ailments often require multiple treatments.

A stop smoking program will often consist of 4-6 initial treatments scheduled in the first few weeks followed by monthly treatments for four to six months.

Find an acupuncture provider to help you quit smoking on Acufinder.com

Copyright 2010 - All rights reserved. This article is protected by United States copyright law and may not be reproduced, distributed, transmitted, displayed, published or broadcast without the prior written permission of Acufinder, Inc.  Only if you obtain prior written consent from us" and from all other entities with an interest in the relevant intellectual property " and include a link to Acufinder.com may you publish, display or commercially exploit any material from Acufinder.com.

Q: Does acupuncture work on animals?

A: Veterinary AcupunctureWhen and Why to Choose Acupuncture for Your Animal Acupuncture works exceptionally well on animals and is a popular t... Read More