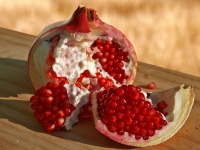 In China, the pomegranate fruit symbolized longevity. Now there is scientific evidence for the fruit's restorative powers.

Scientists have tested the juice in mice and found that it combats hardening of the arteries (atherogenesis) and related diseases, such as heart attacks and strokes.

According to results published in the August 2006 issue of Atherosclerosis, subjects who drank 180 ml (6 oz.) of pomegranate juice per day for three months experienced a reduced risk for atherosclerosis, a condition that leads to arterial wall thickening and hardening.

Scientists have long known about health benefits of pomegranates. The latest studies are showing that the juice limits the genetic tendency toward hardening of the arteries.

"We have established that polyphenols [antioxidant chemicals] and other natural compounds contained in the pomegranate juice may retard atherogenesis," said Claudio Napoli, a professor of medicine and clinical pathology at the University of Naples, Italy. "The protective effects of pomegranate juice were higher than previously assumed."

Pomegranate juice is remarkably rich in antioxidants, such as soluble polyphenols, tannins, and anthocyanins, which scavenge free radicals and help prevent DNA damage that can lead to a number of serious health conditions.

The antioxidant level in pomegranate juice was found to be higher than that in other natural juices, but are still found in blueberry, cranberry, and orange juices, as well as red wine and black tea.

There have been some intriguing studies indicating that green tea can be extremely effective in the fight against high cholesterol. Specifically, the beverage reduces bad cholesterol and boosts good cholesterol, improving an individuals overall cholesterol profile.

Researchers have also found that green tea appears to protect against oxygen-induced damage to bad cholesterol. Drinking green tea also seems to enhance cardiovascular health by improving the consistency of platelets in the blood.

Q: I have Infectious Arthritis. Can Acupuncture treat this type of Arthritis?

A: Are you one of the millions of Americans suffering daily pain when you perform simple mundane tasks such as turning a key, getting up from a... Read More