Secrets of Longevity: Diet and Nutrition 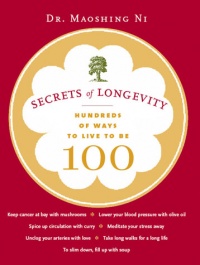 Living to be 100 is not the product of an expensive supplement, brutal daily regimen, plastic surgery or anything out of the average person™s reach.  A few simple changes in the most basic areas of our lives: diet, environment, activity and relationships, can help us reap great rewards.

What You Eat: Diet and Nutrition
Sweet Potatoes and Yams: Not Just for the Holidays
These powerhouse foods contain higher amounts of beta-carotene and vitamin C than carrots, more protein than wheat and rice, and more fiber than oat bran.  Sweet potatoes and yams also happen to be a rich source of DHEA.  This is a precursor hormone"a substance that remains latent until it converts into a hormone that the body needs.  DHEA can become estrogen, progesterone, or testosterone, all essential for your body™s anti-aging defenses to work.  As one ages, however, the body™s levels of precursor hormones like DHEA drop precipitously.  Eat these vegetables year-round and celebrate a long life!

Ginger Gives You Snap
Best known in the West for its antinausea properties, ginger has probably been in the longest continuous use of any botanical remedy in the world.  The Chinese use it frequently in cooking seafood, since it acts as a detoxifier to prevent seafood poisoning.  Besides its popular application for digestive distress, ginger has been found to contain geraniol, which may be a potent cancer fighter.  It also possesses anti-inflammatory properties that help relieve pain, prevent blood clots, and inhibit the onset of migraine headaches.  Since ancient times, Chinese physicians have regularly consumed ginger tea to keep their vitality fired up.

Anti-Aging Pearl Powder
The medicinal use of crushed and powdered natural pearl goes back 2,000 years in Chinese medicine.  Prized by Chinese royalty for its purported anti-aging properties, pearl powder is traditionally used in herbal remedies and in ointments and massaged into the skin to prevent premature skin aging, clear surface inflammation and acne, improve vision, and calm the mind and spirit.  Rich in minerals that benefit the skin, natural pearl has much more to offer than its beauty as an adornment.
Prunes™ Other Benefit
It may be a surprise to you that the prunes your grandmother eats on a daily basis to ease elimination are rated by the USDA as having the highest oxygen radical absorbance capacity (ORAC) score on the scale.  The ORAC scale was developed to assess the antioxidant content of food: the higher the score, the better the food™s ability to neutralize cell-damaging free radicals that lead to cancer.  Raisins, blueberries, and blackberries also score high on the ORAC scale.  So incorporate prunes into your daily diet to reap the benefits of their cancer-preventing properties"and thank your grandmother for her example.

Dr. Mao (as he is known by his patients and students) is a 38th generation doctor of Chinese medicine and an authority in the field of Taoist anti-aging medicine.  After receiving two doctorate degrees and completing his Ph.D. dissertation on Nutrition, Dr. Mao did his postgraduate work at Shanghai Medical University™s affiliated hospitals and began his 20-year study of centarians of China.  Dr. Mao returned to Los Angeles in 1985 and has since focused on Taoist anti-aging therapeutics at his Tao of Wellness Center.

Undergoing treatments with Dr. Mao at the Tao of Wellness and following his nutritional advice has led to a marked change in my physical vitality and my general state of well-being.
"Jim Carrey
Dr. Mao brings generations of experience, an abundance of knowledge about both Eastern and Western Medicine, and his own good heart to his remarkable work.
"Helen Hunt

Looking and feeling young for decades is not just the province of the wealthy and surgically enhanced. Living to be 100 is simpler than most people imagine.   In Secrets of Longevity, Dr. Maoshing Ni shares the secrets gleaned from 38-generations of medical knowledge in his family, and a 20-year study of centenarians in China.  A longer, healthier and happier life is not a result of a complicated supplement regimen, arcane dietary restrictions or any particular exercise, rather it is a combination of simple approaches to all areas of life.  Dr Mao (as he is known by his patients) shares the main areas in which small changes can have a big impact on longevity and general health.

Q: Is it normal to feel sore during and after an acupuncture treatment together with bruises?

A: Acupuncture is a very safe method of encouraging the body to promote natural healing and improve function, however, many people feel a br... Read More