Acupuncture for a City 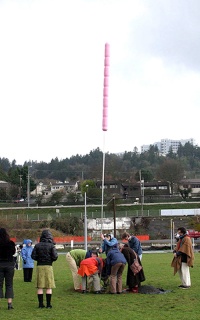 Acupuncture is not just for people anymore, it is also for the earth.

Artist, Adam Kuby, has taken Feng Shui to the next level by attempting to shift the energetics of the environment with acupuncture needles.

While Feng Shi masters have been influencing the energy of our environment for centuries with the placement of  objects, colors and sound; this may be the first attempt to actually needle the earth.

In March, 2008 a 23 ft tall acupuncture needle was inserted at the South Waterfront in Portland, Oregon for the month of March. A city-wide installation of many such needles is possible in the future.

Adam Kuby, an Artist-in-Residence in Portland, Oregon™s new South Waterfront neighborhood stuck the single, 23-foot needle into the ground down by the Willamette River and hopes to plant more, choosing locations where he figures the city's "chi," or vital energy, needs some help.

The artist envisions Portland as a metaphorical body, exploring how energy flows through the city and needling parts of the city that correspond to the different acupuncture organs and meridian systems.

Think of the city as a body the way traditional Chinese medicine does. says Kuby, Not only as a physical entity but also as a system of energy that flows in distinct pathways called meridians. The energy, or Qi, needs to be in balance.  If a person's Qi is out of balance, disease can set in.  The same could be true for a city. This project explores the junction between art, regional planning, the environment, Asian medicine and the health of a city.

In order to diagnose and devise an acupuncture treatment plan for city of Portland,  Kuby consulted with city officials and urban planning coalitions for a list of the cities ailments which included issues such as traffic congestion, the environment, affordability, safety and education.

Along with professors from the Oregon College of Oriental Medicine, Kuby correlated acupuncture points on the human body with the vibrant, "living" city.

By pinpointing Portland™s health problems the project could increase public awareness of these issues, which may in turn lead to actual improvement™s in the city™s health. Says Kuby.

Here is how the Five Element Principles were transposed onto an urban city landscape:
(http://www.adamkuby.com/Acupuncture.html)

About News and Studies

Q: I suffer from panic attacks on a weekly basis. My heart pounds and I have visual changes. Is there something that can help?

A: Yes. Panic disorders are periodic attacks of terror, which usually last 15 to 30 minutes, although residual effects can persist much longer.... Read More