Ancient Medicine for a Modern Disaster 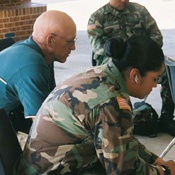 Hurricane Katrina- "Acu-whuuut?" asks a contractor, slightly sarcastically, at the Belle Chasse Air National Guard Base just outside New Orleans. "Acu-puncture" replies Diana Fried, with her characteristically friendly smile. "What's it good for?" "It'll help you relax, and make you feel better" It is the type of conversation Fried and her team members are having a lot these days. Fried is the founder and director of Acupuncturists Without Borders (AWB) which she formed in response to the Hurricane Katrina and Rita disasters.

Disaster response in America has traditionally been organized around the Red Cross model " supplying basic material needs like food, clothing, shelter, and medicine. Partly due to the immense scope of the Gulf Coast disaster of 2005, but also due to pre-existing social imbalances in the area, there is an increasing recognition that this approach is incomplete by itself. Supporting feelings of well being, and inner peace, is an important part of healing from trauma and ultimately helping the whole recovery process.  Acupuncture treatment is one way for people to relax and rebuild their personal strength after traumatic experiences.

While politicians and planners confront the complex tangle of political, economic, and environmental issues involved in rebuilding the area, organizations such as Acupuncturists Without Borders have mobilized to offer healing on a level often missed by larger bureaucracies.

Yes, box lunches and motel vouchers are important, as are mega-plans to rebuild the levee and devastated neighborhoods. But unless the foundation is repaired, fixing broken windows will only go so far. The foundation for any vibrant civilization includes a just and compassionate society which nourishes the body, mind, and spirit.

The guardsmen sit quietly in a curved row of chairs " just a hint of a circle to emphasize our mutual interdependence in the web of life, as well as nature™s fundamental design. Five acupuncture needles in each ear balance the Qi (pronounced "chee") or energy, in their internal organs and nervous systems, releasing endorphins, the body™s natural feel good chemicals, and increasing their feelings of relaxation and well being.

As the minutes pass, there is a palpable shift in the energy of the tent, a kind of smoothness and serenity in the air. After thirty or forty minutes, we begin to remove the needles. The men thank us and ask when we will be back. We hope to return in two days.

The scope of this disaster impacts everyone " residents, evacuees, and responders. In the proceeding weeks, AWB has treated citizens of New Orleans, National Guardsmen, workers and officials for FEMA and the Red Cross, policemen, utility workers, contractors, volunteers at Food Kitchens and health clinics, as well as their own team members.

Herein lies the magic: A quick and easy treatment protocol, portable, and easily rendered to large groups in a communal setting. Within the quiet healing circle of an acupuncture treatment room, the boundaries of fear and suspicion separating a member of one particular race, class, occupation " and so forth " from another, are lowered and sometimes dissolved completely. The web of life becomes deeply apparent, bestowing a type of wisdom needed not merely to heal New Orleans and the Gulf Coast, but the entire planet.

Acupuncturists Without Borders is urgently asking for donations to continue the relief work in Louisiana. Please go to www.acuwithoutborders.org to donate.

About News and Studies

A: Acupuncture is an effective adjunctive therapy for seizures in adults and children.  Ancient Chinese medical texts discuss the use of a... Read More